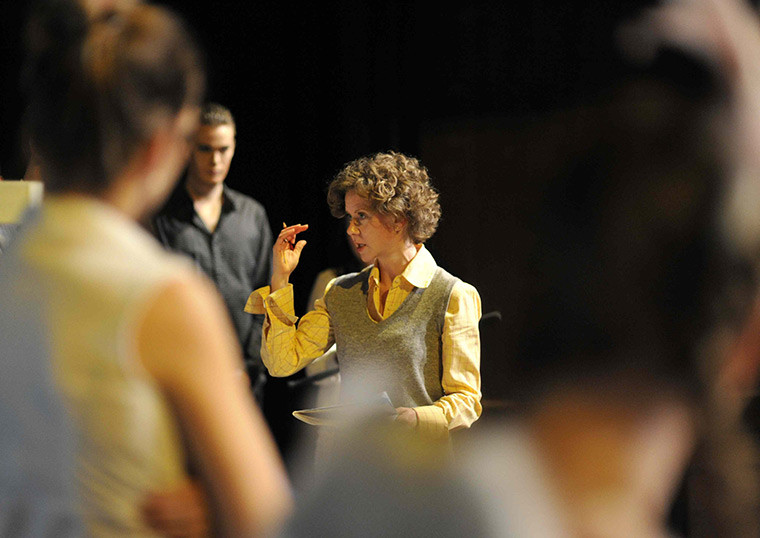 Throughout my career I have had the privilege to work with incredible artists, talented technicians and a variety of amazing arts professionals. I have worked in arts institutions, instigated exciting new arts and event initiatives, and managed extraordinary performing arts companies. As an artistic director I have led creative, technical and financial teams in the formation and roll out of annual performing arts seasons. As teams we have created artistic audience experiences and memories of which I am very proud.

As Artistic Director Emerge Festival, and Dramatic Arts Mentor for graduating AIM students 2014-2015, I am able to experience the imagination and palpable excitement of students writing, creating, directing, designing, producing and acting in their own work. I feel inspired and humbled being in the room with so many creative minds. These graduating students understand the landscape of the local and national arts scene and know how valuable it is to be multitalented performing arts professionals. Each individual is stepping out of their comfort zone to take on new creative & technical roles, and are achieving far more than they thought possible. It’s an exciting creative atmosphere in which I not only curate the festival, but also facilitate critical artistic debate, and inspire this new generation of creative artistic entrepreneurs to work as a collaborative & supportive ensemble. My advice to emerging artists is “Jump in. Be brave. Be open. Be supportive of your peers. Work hard & smart. Seek critical feedback. Network. Be tenacious. Persevere. Believe. ”

As Co-Artistic Director of Jigsaw Theatre Company, I worked as part of a four-person Artistic Directorate responsible for the strategic & fiscal management, and artistic direction of the company. The four member of the inaugural Artistic Directorate consisted of: Chris Thompson; Ben Laden; Catherine Roach and me. We worked closely with the General Manager and Board on refreshing the company’s strategic Business plan. This included: a review of business operations and activities and a reassessment of income streams, leading to the development of a new Business Model, Plan and Artistic Framework; the creation of a new annual program; commissioning of new work, and improved company management through best practice evaluation and KPI metrics. We built strong core relationships with: local and interstate venues & producers; presenting partners; media; government bodies; new sponsors and private philanthropic donors. The result of this strategic five-year planning was a refreshed company with new engaging productions, a strong vision, and better management resulting in renewed media and public interest, and new sponsorship agreements and philanthropic support. For Jigsaw I created Pearl Verses the World.

Between 2005 -2011 I was artistic director of independent arts consulting company Green Badger Productions. Through this period I consulted to arts companies and agencies across Australia and New Zealand. I provided services as a creative director, producer, programmer, workshop facilitator, French interpreter and artist.

Alongside consulting, I worked as performing arts director creating children’s musical productions for: the Concourse Theatre, Sydney Opera House, and The Edge Aotea Centre Auckland; interactive art installations at The Entertainment Quarter; and operatic productions for The Sydney Conservatorium of Music.