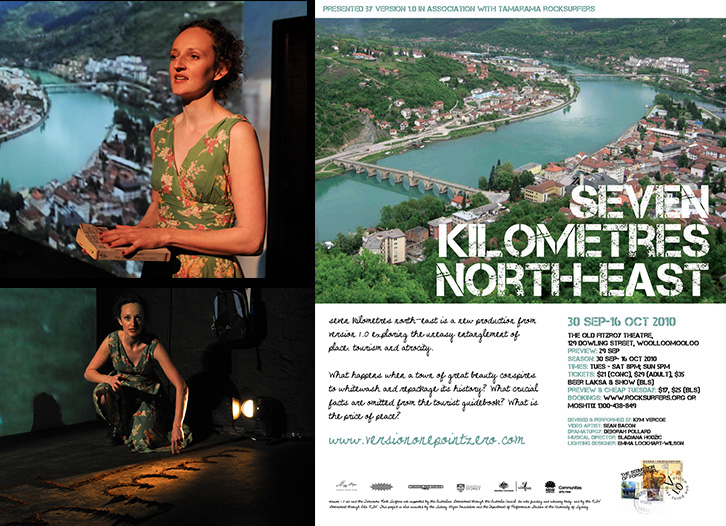 “Well-crafted with clever use of video and live song, Vercoe gives an engaging performance, building the show slowly to its emotional conclusion, prompting a few tears and plenty of after-show discussion in which Australian parallels didn’t escape notice.”
Jo Litson, The Sunday Telegraph

The work was triggered by a visit to the famous Mehmed Pasa Sokolovic Bridge, Bosnia-Herzegovina, in 2008. Completed in 1571, this bridge forms an historical link between east and west, made famous in Nobel-prize winning author Ivo Andric’s novel The Bridge on the Drina.

The nearby Vilina Vlas Spa Resort in Visegrad was recommended in a tourist guidebook, and so Vercoe checked in. The visit was a great success, filled with tourist adventures and slivovitz-fuelled conversations with locals. Upon returning home, Vercoe discovered to her horror that certain facts about Visegrad had been omitted from the tourist guidebook. The travelogue shifts, turning to a darker reflection upon how places bear traces of the atrocities that occur within and around them, the unspeakable and unbearable acts that current residents are only too happy to see erased or obscured. Drawing upon journal notes, the writings of Ivo Andric, tourist guidebooks, correspondence with guidebook editors, and transcripts from the International Criminal Tribunal for Yugoslavia, seven kilometres north-east is an evocative and deeply personal political performance.